The Decision To Use The Atomic Bomb and the Architecture of an American Myth by Gar Alperovitz is a well-documented, in-depth, sobering look at both the decision of the United States of America to drop atomic bombs on the cities of Hiroshima and Nagasaki, as well as the subsequent lies and distortions used to justify the decision and form the official mythology that continues to maintain a hold on the popular U.S. consciousness.  It is a book about humans conspiring together to carry out and justify the mass murder of hundreds of thousands of other humans.  A serious history book for serious historians, the book clocks in at about 670 pages of text and about 110 pages of footnotes and is an exhaustive study of relevant documentation available at the time of publication (1995).

Brief (simplistic) summary:  the use of the atomic bomb was not a military necessity to end the war between the U.S. and Japan, was not the prime cause of Japan’s surrender, and did not hasten the end of the war. 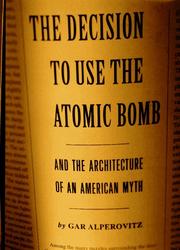 The decision to use the atomic bomb and the architecture of an American mythGar Alperovitz; Knopf 1995